After hearing that I was officially becoming Mr Gay Canada 2019 I wanted to organize a party to share the great news with friends, PR/Ad agencies, people from the charities I want to support and prominent people from the LGBT space. And of course I only gave myself 3 days to organize and plan the whole thing… including finding a venue and inviting people! It was quite the stressful experience that I knew was either going to be a surprise success or a complete disaster – check out all that happened in the video above. 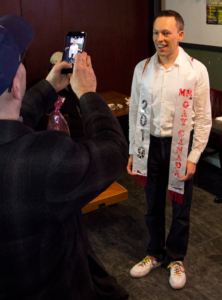 (SPOILER ALERT) We ended up having a pretty great turn out! A big thanks goes to everyone who was able to make it out on such short notice. The announcement went fabulous! Everyone was thrilled to hear the news and had their fair share of questions about what I was going to do with the title. I had the chance to speak one on one with people from many different successful blogs and media outlets such as Zain, the head of media production at Daily Hive, a Vancouver local news/media outlet with over 4 million readers. I had a great chat with one of my best friends Mary, the face behind Vancouver Bits and Bites who later went on to write a blog post about my big news! Mark Robins from GayVancouver.net also attended and live streamed the announcement on Facebook which expanded my reach to many viewers who tuned in live and afterwards. I had the honour of being featured in a series of photos and videos posted on social media from numerous guests including Rebecca Coleman, a social media expert and instructor at BCIT, one of the provinces biggest tech schools.

All in all it was a great evening where I was able to share my joy and excitement with so many amazing people who I hold close to my heart! I am now even more inspired and full of motivation to get out there and be the best Mr Gay Canada that I can be. Make sure you stick around to see where this all takes me!

I want to say a massive thank you to Yagger’s Downtown Restaurant & Sports Bar for fitting us in with such little notice! Their private space was perfect for this event with the big screen and flexible seating options. They are conveniently located in downtown Vancouver with an additional location in Kitsilano. With a great vibe, friendly servers, and amazing food and drinks, Yaggers is a great spot to stop in for a drink and food, or if you need a venue to host an event, make sure you 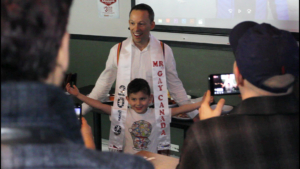 A 3 minute version of this series also airs on TV in Canada on the OUTtv network! OUTtv is our national LGBT station and they’ll be showing my experiences as Mr. Gay Canada daily in between their regular programming. If you missed my announcement video about becoming MGC, check out my previous blog post and subscribe to my YouTube channel to see new episodes as they come out!