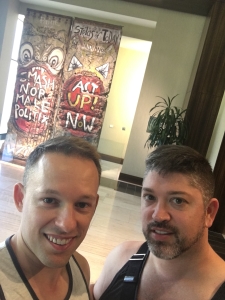 They say BIG things happen in Dallas and they ain’t lyin! I got to experience the famous Texan city during their Pride celebrations along with my boyfriend – and my entire family! My brother, and fellow internet entertainer Spandy Andy just bought a house there, now that he’s actually engaged to a Dallasite.  So my parents went to check out his new house and celebrate their engagement, at the same time that my boyfriend Heath and I were there for Pride!

We stayed at the Hilton Anatole and ate at the Media Grill + Bar and SĒR Steak + Spirits in the hotel. We also had some food at Cedar Springs Tap House, some drinks at JR’s Bar & Grill where our friend and local drag queen Raquel Blake performed. With my family we ate at Seasons 52 and visited some of the sights in the City Pass like the Sixth Floor Museum, the Reunion Tower Geo-Deck, and the Arboretum & Botanical Garden. Heath and I went to the Purple Foundation pool party, a gay BINGO event and amazing drag show at Station 4, Pecan Lodge for a tasty dinner, and we had a quick stop at the very busy Round-Up Saloon. On the day of the Pride Parade & Festival we also ate at Cedar Grove, saw Erika Jayne perform live, and did a bit of shopping at Skivvies.

The full vlog of my trip is above and here are some of the photos I shared on my Instagram account as well:

There are more travel videos on my YouTube channel and check out the episode of The Sassy Scoop below that I did during my trip about 10 of the BIGGEST things you could see in the world, which also aired throughout the following week on OUTtv: