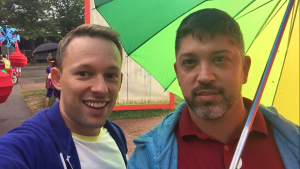 My boyfriend and I aren’t typically big Fair goers because neither one of us are really into the rides, but this year we went to The Fair at the PNE to see some of the other stuff they had going on and I of course documented it on video to share with you in the vlog!

We had some food, checked out the TELUS Future Home, walked through the Prize Home, watched Boy George jam out with Culture Club, and even bought something for our kitchen (how domestic of us!) at the marketplace.

Check out everything we got up to in the video above and then leave a comment below, especially if you’re Canadian as well, because TELUS has a couple giveaways to send to two of you from Withings! The first one is an Activité Steel Watch to automatically track your activity and the second one is a Body scale to help you gain insights while you lose weight. Both futuristic, awesome, and randomly being given away to two people who comment below before the end of September! A big benefit of being a Team Telus Advocate is that I’ll have more giveaways like this in the future too, so be sure to sign up for my newsletter to be notified of them!

Thanks for checking out the video and if you want to see the Future Home as it tours around over the next few months just have a look in the video description of my PNE video on YouTube for all the dates and locations!

***UPDATE: The winners were randomly chosen during a live stream broadcast – congratulations to Sammi and Terry!
I have another giveaway coming up soon so be sure to sign up for my newsletter on the right!***