As travel restrictions began to ease the first thing to open up for those of us who live in Vancouver, BC was travel within the province. As soon as it was announced that was going to happen I booked my first trip, and it was to a spot that not many gay travellers would necessarily think to put at the top of their list, but one they should actually consider: Penticton.

Penticton is home to only about 35K people and often smaller places aren’t the most LGBTQ-friendly, but luckily this city breaks that trend – it’s a very welcoming spot that isn’t necessarily a gay mecca, but is definitely open and accepting to our community (and there’s even a gay nude section at their Three Mile Beach).

Located between two lakes, Penticton has hot summers, dry winters, and gets a ton of sunshine (more than 2000 hours each year)! It takes about an hour to fly to from Vancouver and it can even be flown to directly from Toronto in under 5 hours. It’s a great destination for the queer traveler who enjoys both outdoor activities and delicious food… and drinks! In addition to wineries and cideries, Penticton’s eighth craft brewery is currently under construction – which will give the city the designation of having the most breweries per capita in the country.

During our visit my fiancé and I stayed at the Penticton Lakeside Resort, which has a fantastic location right on the waterfront. It has a private beach area and also easy access to the public beach as well as the walking path that goes along Okanagan Lake. With well over 250 rooms, panoramic views, restaurants, lakeside patios and amenities like a gym, pool, and hot tub, it really has everything we could want in a place to stay.

For food options you might be surprised at the choices available in Penticton. We took sandwiches on freshly made bread from the Joy Road Pop Up Bakeshop with us on an excursion, enjoyed some top-rated maple bacon poutine on the Slackwater Brewing patio after a day out on the trails, and treated ourselves to a farm-to-table dinner made from ingredients in the on-site garden at the upscale Bogner’s of Penticton. We also had a fantastic lunch at Time Winery, which is uniquely situated right downtown, and one morning we had breakfast at Wayne and Freda which has a great variety of healthy and unique options.

When it comes to adult beverages there is also no shortage of options, many of which are locally sourced. The Naramata Bench has some of the highest acclaimed Okanagan wineries – over 40 of them just within a 20 minute drive in fact. There are of course the aforementioned craft breweries as well (we enjoyed flights of beer on the patio at Cannery Brewing) and even some cideries, like La Petite Abeille, which we stopped at for a bubbly pear-based cider from their hand-picked fruits when biking along the Kettle Valley Rail Trail with an e-bike from Hoodoo Adventures. 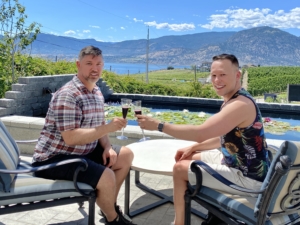 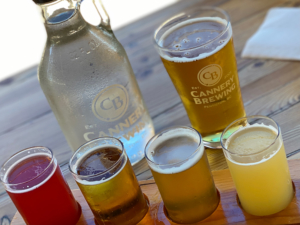 Another nice thing about this smaller city is that you can visit it without a car because so much of it can be explored virtually ‘fuel free’ by foot, by pedal, or by paddle. So whether you’re looking for some outdoor adventure kayaking along the lake on a guided tour (like we did with Hood Adventures as well) or to just enjoy the flavours of the area in a welcoming environment, Penticton could be the perfect escape you never even knew you were looking for. It was my second time there (previously visiting in the winter) and it certainly won’t be my last!

Disclosure: The experiences, restaurants, and accommodations in this trip were provided by Travel Penticton