Last year I had the honor and privilege of holding the title of Mr. Gay Canada 2019. Rather than being focused on looks, as some might assume it to be based on other pageants, it had much more to do with things like activism, volunteering, and issues within the LGBTQ community in general. When I went to compete for the title of Mr. Gay World 2019 in South Africa each contestant had a different cause that they were focused on and mine was LGBTQ refugees.

I feel so lucky to have been born in a country where I’m able to very openly express who I am without fear of repercussions or persecution from my own government. Unfortunately an estimated 70 countries around the world still criminalize same-sex relations between two consenting adults. For LGBT people in those countries life can be full of many hardships with nowhere to turn when even friends and family can turn against you for just being yourself. 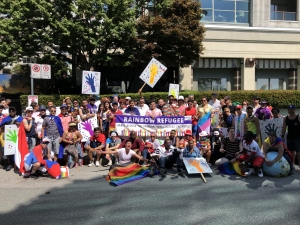 I live in Vancouver so I teamed up with Rainbow Refugee to create my own sponsorship circle in order to bring over one of those refugees in need so that he could start a new life of being open and free. Throughout the year I raised both awareness and money for him, and the plight of LGBTQI refugees in general, and I’m thrilled to announce that he’s now in Canada, he has a home, he has a job, he has friends, and he is happily living his new life without fear or oppression!

He’s chosen to have a very private life, but one of his friends who also arrived in Vancouver around the same as him joined me for a YouTube video to talk about what life was like for him before (and after) being rescued by a sponsorship circle as well. We met up in Yaletown Park to have a chat about what the money raised has helped him to do and where he might have been if generous Canadians hadn’t stepped in to save him. 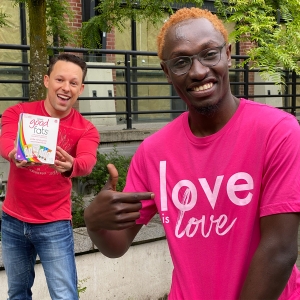 It makes me really proud to be Canadian to know that others are stepping up to help people like Ryan who are in such desperate situations, and there are still so many more who need our help. That’s why I was thrilled to hear that Love Good Fats, who I already love to support because they’re a Canadian company that’s gay owned (and because they make delicious bars and shakes that are low-carb and low sugar) have stepped up to donate $1 from every sale of their special limited edition Pride Variety Packs to Rainbow Railroad (raising up to $50K)! Through that organization they’ll be able to help up to 4 more LGBTI refugees to start a new life in a safe country to be free to express themselves however they like in a society that accepts them for whoever they are.

By purchasing a Pride Variety Pack you’ll get to help make that happen AND enjoy 12 of their ridiculously delicious bars that have more of the good fats you need and less of the carbs and sugars that you don’t! I’ve been eating their bars for a couple years now so I’ve been a fan of their product for a while and I knew that Suzie Yorke, the woman who started it all, is an openly gay Canadian so I was already happy to support them, but after hearing about this initiative I was thrilled to see that they also care about some of the same causes that I do! 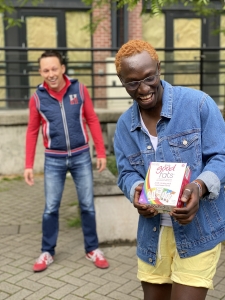 So a big thank you to Ryan for sharing his story, to Rainbow Railroad for the work they’re doing to help more people like him, and to Love Good Fats for creating this initiative so they can raise more money to save more LGBTQ lives (and of course for making yummy snack bars for people like me who want something quick and easy to eat without having all the extra sugar and carbs)!

This post has been sponsored by Love Good Fats – they can be found on social media as @lovegoodfats and you can see what’s being said about this initiative by looking for #LGFPride.

1 thought on “The LGBTQ Refugee that I Sponsored is Here!”