You’ve probably heard about VPNs by now, but maybe you don’t really know what they are or why they matter. Well, a VPN (Virtual Provider Network) is basically a series of virtual connections routed over the internet. Those connections allow your data to be encrypted as it travels back and forth between you and whatever resources you’re using, like web servers. It gives you online privacy and anonymity by creating a private network from a public internet connection. VPNs mask your IP (Internet Protocol) address so that your online actions are basically untraceable.

Make sense? The long and the short of it is that without a VPN you and your data aren’t nearly as private and protected as you/it could be.  Every time you visit a website you end up sending data that could give your location, your browsing history and other sensitive information like banking details or other credentials. That’s because whenever you type a URL into your browser the request goes to an ISP (Internet Service Provider) server first and then the request is forwarded to the destination.

That allows your ISP to collect all of the URLs you visit and monitor the amount of time you spend on each webpage that you go to. It also can track your locations, hobbies, interests and more. Not to mention collect your personal contacts and unencrypted passwords. Your online activities basically act like an open book to your ISP so your privacy isn’t nearly at the level it could (or should) be.

This can be especially important for members of the LGBTQ community who aren’t open about their sexuality. That could be the case because they’re just feeling ready yet, they’re living in a home where they don’t feel safe coming out, or they’re even in one of the 70+ countries where being gay is still criminalized. Personal VPNs can be particularly helpful for someone who doesn’t feel comfortable accessing LGBTQ related information online and leaving an online trail that could show that. Advertisers also often remarket by IP address so someone could even be inadvertently outed to a family member by having LGBTQ related ads displayed based on previous web surfing habits.

A personal VPN service masks your IP address so that when you connect to the internet via your VPN, your ISP won’t know which sites you’re accessing as they’ll only see the IP address of the VPN provider instead of your real IP address. VPNs can also get around online censorship by bypassing blocks placed on Internet access in certain countries. This can be helpful to LGBTQ people living in countries that restrict access to certain LGBTQ-related websites and content, as well as to LGBTQ travelers visiting those countries who aren’t used to having those restrictions.

What first got my attention to use a VPN though was actually just the simple fact that as a Canadian there are sometimes online videos in the USA that I can’t watch because they’re restricted to being viewed in that country only. Most notably for me has been when people share a funny sketch from Saturday Night Live and it’s inevitably not watchable north of the border. I used to search around to try to find a website that might have a version of it that hadn’t been put behind the country restriction, which usually just resulted in a very low quality version at best, or frustration and a waste of time at worst. Now with a VPN I just turn it on and voila – any video, including those SNL skits, are available to me as if I was located in the United States! 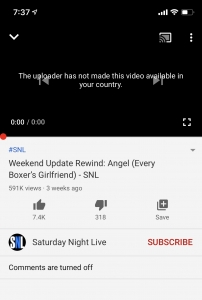 Conversely, a VPN can provide access to a number of geo-blocked streaming services for Canadians who are traveling out of country as well, which they normally can’t get access to once they cross the border. This includes things like Netflix Canada, DAZN (an extensive library of sports not available in US), NHL.TV, MuchTV, CBC, Hulu and Disney+.

The VPN that I use is VyprVPN. They use an audited no-log VPN with 5 simulation connections which offer high-speed streaming of restricted content. Their high-end encryption has a NAT firewall to protect my IP address while going through their worldwide server connections. They offer a 30-day money back guarantee and 3 different plans to choose from – right now you can even get up to an 81% discount, which makes it a super affordable way to increase your privacy and give you access to more content!

Whether you want to bypass censorship and restrictive networks, stream without limitations, defeat data retention, or just ensure no one else can know what you’re doing online, a VPN can be a really easy and inexpensive way to accomplish any/all of those things. I use it on both my laptop and my iPhone so whether you want to use it on a computer, a smart phone, or both, try it out for a month yourself and I bet you’ll be convinced it’s worth having for years after that too!

This post is not sponsored, but contains an affiliate link which provides a discounted rate and compensates me for passing the deal on to you!