OK, let’s get this out of the way right out of the gate: yes, this place is called Hell’s Gate. As in the place that you’d think would lead to hell. But this place was absolutely not hell in any sense of the word! In fact, the only hell someone could likely experience here is the sunburn you could feel if you don’t put on some high quality sunblock. We’ve all been there though, haven’t we?

Anyway, Hell’s Gate is actually a place in British Columbia that’s a couple hours East of Vancouver. Once you arrive  you get to ride on an Airtram which, in case you didn’t know, is a tram that goes through the air. Ok, you probably were able to figure that out on  your own. Interestingly enough though, it also happens to be one of the steepest trams that’s fully suspended in North America. That makes for a pretty fun and scenic ride!

I went there with my boyfriend and my best friend Mary who also brought along her husband and son. It made for a great day trip! 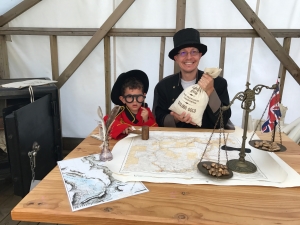 After taking the tram there’s a special area for kids to have fun and rock out and there’s even some wildlife running around. Nothing like a mountain lion or a bear, but more along the lines of a cute birds and squirrels – that kind of wildlife experience. 😉

After we spent some time there we then went into the town of Yale to have lunch and look at the Historic Site. The town was a pretty booming place back in the day when there was gold in them there hills, but now there’s not a lot going on – which makes for a great escape from the hustle and bustle of the big city. There was a lot of interesting stuff to look at (and even some costumes to try on) which helped transport us back in time!

It was a beautiful summer day and a fun time with my partner, my bestie, and her family!

Want to see more videos like the one above? Make sure to check out the Sassy Sundays playlist! While the Sassy Scoop will usually feature Top 10s and viral video reviews and top 10s of the greatest, worst, and weirdest around the internet, Sassy Sundays feature everything from travel to events to more travel and a lot of fun stuff in between.