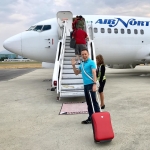 In a totally random turn of events I found myself flying to Regina for a weekend to see a CFL game! TELUS invited me to join them on a special #AllConnected trip known as Operation Orange where a select group of us got to join the BC Lions on their weekend trip to battle it out on the field against the Saskatchewan Roughriders!

We flew on the same charter flight as the team and even stayed at the same hotel as them so we sort of got to feel what it’s like for the players to have an away game like this. It was a pretty cool experience to say the least and a rare opportunity that very few people get to experience! 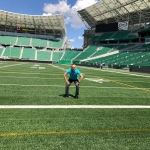 When we got off the plane we were immediately taken to the new Mosaic Stadium where we were able to walk out on the field ourselves and then get a tour of it from the Roughriders CFO. At this point the BC Lions hadn’t even played a game in this new stadium so it was a pretty special feeling to be out on the field there even before they were!

The stadium holds about 33,000 people and a sell out crowd would be filling all of those seats the next day. We would be in a good section, but sitting among rival fans, so we knew it was going to be an interesting experience with most likely some good heckling going on! 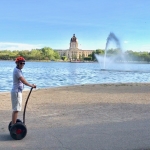 We had the rest of the day free after our tour so I met up with some of my boyfriend’s family who live in Saskatchewan and they suggested we ride on segways around a lake! That sounded like an awesome suggestion to me so we booked with Regina Rolling Robot Tours and were taken around Wascana Centre for a super fun trip around a beautiful park area. We saw the parliament building, a totem pole, a statue of the Queen on a horse surrounded by flowers… it was actually quite an impressive and beautiful area to check out.

Following that we spent a bit of time around the Regina Folk Festival just checking out some of the vendors in the area. 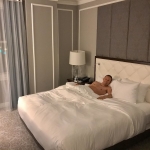 That night I stayed in the Hotel Saskatchewan, Autograph Collection, which is one of the most historic hotels in the area and quite the majestic building. Even though it was Saturday night and I was tempted to go check out the nightlife I instead opted to just go to bed… it looked too comfortable to pass up and I was exhausted from the day!

The next day I met up with the rest of my BC Lions crew as we went to a special pre-game talk by the former President & CEO and the current GM & Head Coach of the team. They played a hype reel for us that they would be showing the players to get them excited and ready for the big game and then we filled up on a buffet lunch before heading out! 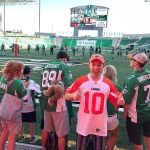 When we got to the stadium there was a party in the park that was just getting underway where we could grab a Pilsner (or something else, but when in Rome…), play some games, listen to some music, and socialize with other fans. Unfortunately for us most of those fans, by far, were wearing green. But we stuck together and truth be told, people in Saskatchewan are generally quite friendly, so no one gave us too hard of a time.

Shortly before the game began we were allowed to go inside the stadium where we were given special field-side access to see the players warm up. That was quite cool – even if we were stuck on the Roughriders side of the field! 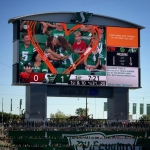 When the game began we had high hopes that our flight home would be a big celebratory party, but it didn’t take long for us to realize that we were in trouble. The Roughriders kept getting more and more points, while the Lions got none. The only highlight in the first half of the game was when the kiss cam honed in on a lesbian couple. It made me feel proud to be Canadian and thankful to live in a place where that kind of PDA is accepted and embraced!

Unfortunately during the second half we weren’t able to get in enough points to win, or even come close, so we sadly had to leave the stadium with a big defeat. Not what we had hoped for, but a fun experience none-the-less. 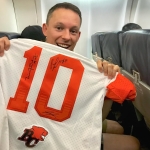 During the flight home some of the players came to the back of the plane and chatted a bit with us so I took the opportunity to have a few of them sign my jersey, which was really cool. It had been quite the weekend and hard to believe we had only flown out of Vancouver the day before! A whirlwind trip for sure and a really fun way to spend a couple days away.

Thank you to TELUS for bringing me along on this little adventure and to the BC Lions who let us join them for their inaugural game at the new stadium in Regina. I know next time they’ll win and make Vancouver proud! 😀