Josh and I often travel to more light hearted locales than a former battlefield and cemetery, but this trip was so poignant and special. I think everyone, especially political and military leadership, should have to spend time in a place like Ypres.

Perhaps a cliche, but it’s really hard to describe one’s emotions as you walk past thousands upon thousands of simple white graves and wall after wall inscribed with the names of boys and men that never came home.

Sadness? Of course. Shock? Definitely. But surprisingly also anger. Anger at the massive loss of life on both sides. Anger at the people who could do this. But deeper anger that humans can be so inhuman. I use the present tense on purpose, despite this being the 100th anniversary of the end of World War 1 – the fact that there was a WW2 and so many wars since then makes me angry.

There are over 150 Commonwealth cemeteries in the Ypres Salient. Ypres is a charming town in a fascinating region with a dark history. 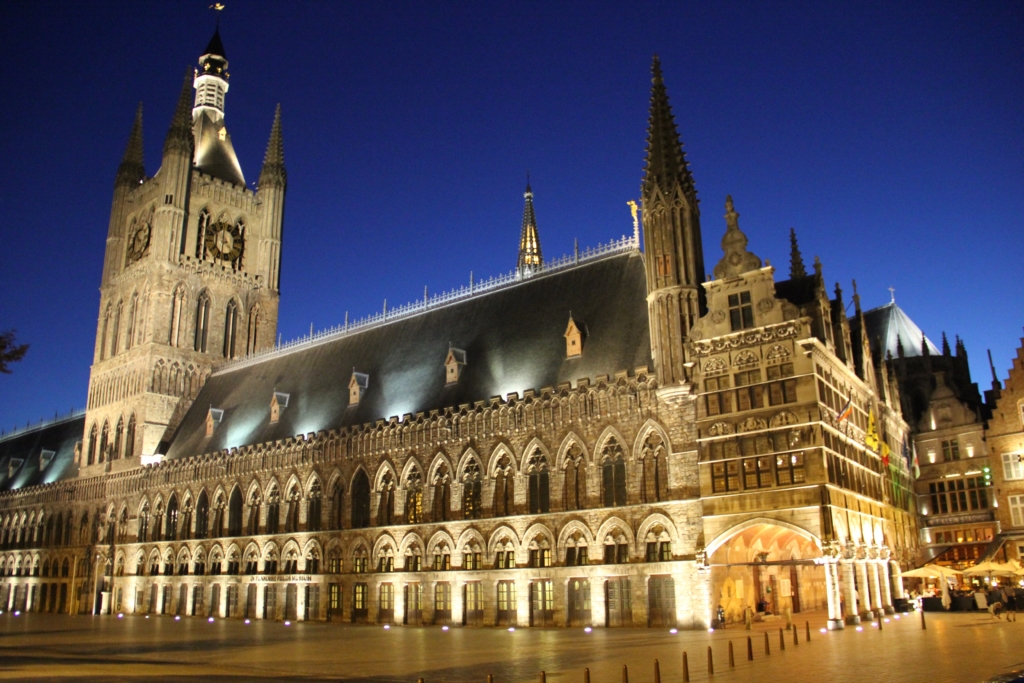 The entire town of Ypres was flattened by bombing. All that was left was debris. The pictures of the devastation reminded me of pictures of a category 5 hurricane wiping out a beach town. But the resilient people of Belgium rebuilt. Spectacularly. Their town was beautiful before the war so they rebuilt it to be beautiful again. Makes sense! It was incredible that they were able to reconstruct the immense Cloth Hall back to its 1304 AD Gothic glory and the 14th century St. Martin’s Cathedral’s epic spires. Now the town’s main square is dotted with delicious chocolate shops, restaurants serving the fantastic local cuisine, pubs serving the local beers, and charming hotels. 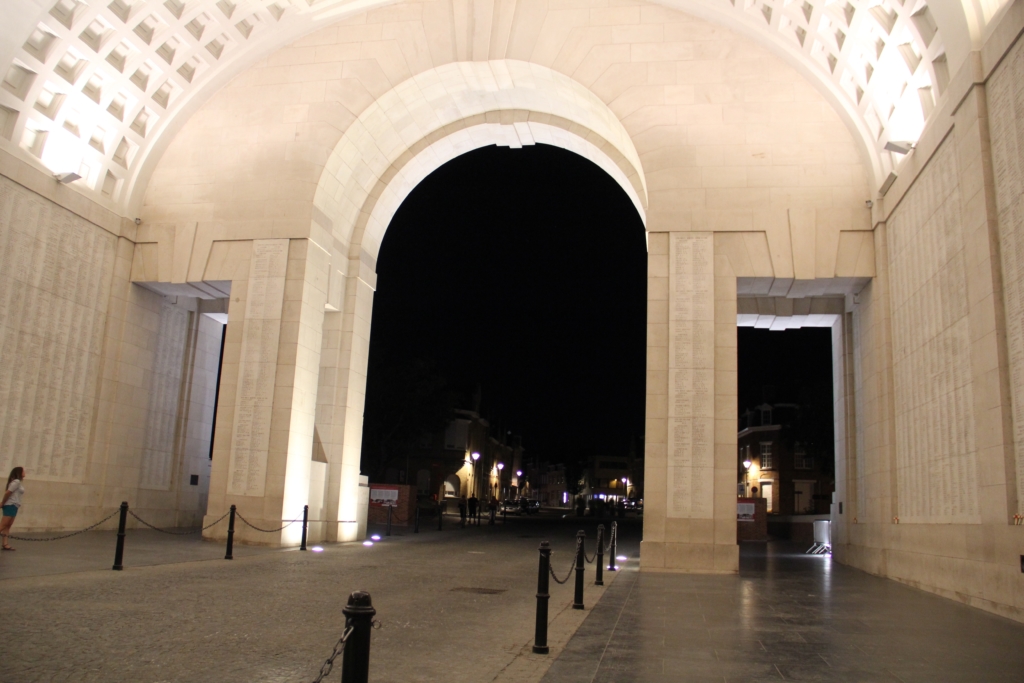 The incredibly moving Menin Gate, with almost 55,000 names of Allied solders killed, but who were never found, arches over the main road into the town. It’s hard to imagine all those men died in and around that one town alone. The names just stretched on and on. They were all sons, fathers, or husbands to someone. Every evening for the last 90 years, The Last Post service has been carried out at 8pm under the Gate’s beautiful domed ceiling. It’s a somber expression of gratitude to the liberators of Belgium. 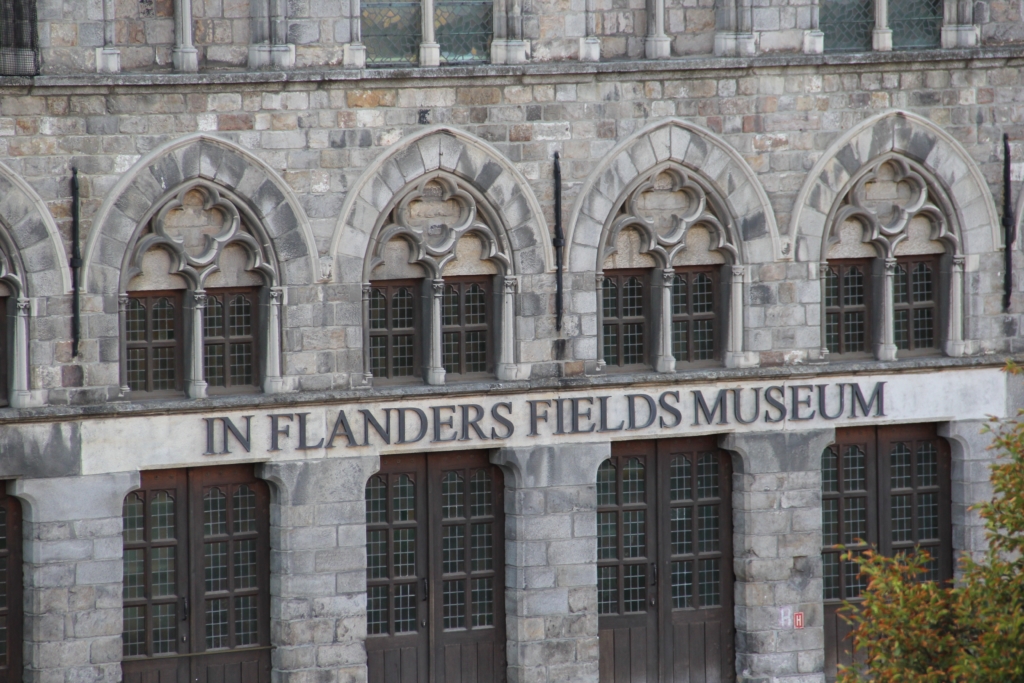 The In Flanders Field museum, located in the Cloth Hall, was a great way of discovering the region’s history during WW1. It reopened in 2012 with what I thought were excellent exhibits full of artifacts, displays, and interactive stations. The name of the museum is in reference to the poem of the same name by Canadian Lieutenant Colonel John McCrae, MD. I can’t imagine the horrors he saw as an field doctor. We also toured the bunker that he worked out of.

Our day included several stops to a few of the more well known cemeteries of the area. The largest, Tyne Cot Commonwealth cemetery, has 12,000 graves and another 35,000 names of missing soldiers engraved on a long curving wall. Just staggering to look across the endless rows of white headstones. 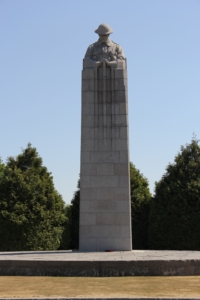 The Saint Julien memorial commemorated the courage of the 18,000 and eventual fall of 2000 Canadian solders in poison gas attacks by the German army. It’s centrepiece, an impressive 11 meter statue called The Brooding Soldier, stands guard on what is called Vancouver Corner. It’s understated simplicity was beautiful.

Our day was really unimaginably sad yet absolutely unforgettable. I’m certainly glad to have spent the day with Josh learning about the history of The Great War and specifically Ypres. The 16 million soldiers who were killed died fighting for the freedoms we enjoy today. As a gay couple this isn’t lost on us. Our very right to exist could have been lost if the German forces had prevailed a century ago.

For more information on visiting this area go to www.visitflanders.com