I had my first live interview in person as Mr. Gay Canada on the Vancouver is Awesome Podcast! I was pretty nervous to be interviewed honestly – mostly because unlike my own videos there wouldn’t be any editing and I wouldn’t be in control of the content. So whatever I said would be put out there for the whole world to hear and judge without me having any control over it at all! However, I made sure to do my research and arrive prepared, ready to talk all things Mr Gay Canada and LGBTQ related.

Lindsay and Adam, the two hosts of the Vancouver is Awesome podcast, were very welcoming, professional and obviously experienced as they kept the topics on point and interesting. We covered lots of different areas – I got to tell them all about what it took to become Mr Gay Canada 2019, the upcoming Mr. Gay World competition being held this spring in South Africa, and what I’m doing (or will be doing) with the title I’ve received. 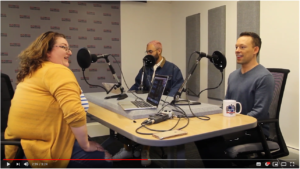 Both Lindsay and Adam were especially interested in my community work. As some of you will already know, I have done quite a bit of volunteer work with organizations like the Dr. Peter Center, A Loving Spoonful, Foundation of Hope, and AIDS Vancouver to name a few. However, once I brought up my passion of helping LGBTQ refugees to get into Canada, their ears perked up and they had a number questions about the topic. They were surprised to hear that many LGBTQ people flee to our country due to persecution in their home countries. I did my best to educate them and the listeners a little more on just how scary it can be to be lesbian, gay, bisexual or transgender in a number of countries around the world. With many taking steps backwards like Chechnya (saying they don’t even have LGBT people, but then stories coming out about gay citizens being put into concentration camps) I knew it was an important to bring up and spread the word.

All in all it was an amazing experience getting to be a guest on their podcast. Make sure you check out how it went in my YouTube video above and you can listen to the full podcast episode.

A new episode bringing you along with me on my journey as Mr. Gay Canada 2019 will be uploaded every week or two, but I’ll have plenty of other videos in between those as well, so be sure to head over to my YouTube channel and subscribe with post notifications (just click on the bell icon after clicking on the Subscribe button) to be alerted as soon as my new videos go live!

Did you know that a 3 minute version of my YouTube video also airs on TV in Canada? OUTtv is our national LGBTQ station and they’ll be showing my experiences as Mr. Gay Canada in between their regular programming. If you missed my announcement video about becoming MGC you can see that and any of my previous videos about it right here.